The coverage of street light is grossly inadequate especially in the interior lanes and bye lanes of the city.  There is constant demand from the citizen of Guwahati City to provide street lights in their areas citing security as major concern.

Guwahati Municipal Corporation has decided to convert the existing street light in GMC area by LED street lights. Also in all the new projects undertaken at present are all LED based lights. The following are the projects being undertaken by Guwahati Municipal Corporation which are at various stages of implementation. An Amount of Rs – 25.72 Crores has been received for this purpose under 4th Finance Commission devolution grant.

Project Jyoti (Own your Street Light)

Hence, the project “Project Jyoti – Own Your Street Light” was conceived with the intention to facelift the image of the City and to improve the security concern without incurring any regular additional financial burden on the Guwahati Municipal Corporation.

As per announcement made by then Hon’ble Chief Minister of Assam a scheme “Project Jyoti” has been introduced to illuminate the lanes and bye lanes of the city. Any resident of Guwahati can apply for availing the facility of this scheme.
Under the scheme, GMC will install a 16 watt LED bulb facing towards the street with pole and other fixtures inside the compound of the applicant. The cost of power consumption is to be borne by the applicant.

GMC is expecting increase in demand of the scheme once the street lights in the initial phase are made operational. The project has been inaugurated by then Hon’ble Chief Minister which will eliminate the problem of safety during night times across the nook and corner of the city.

Total 10,000 applications has been received, of which: 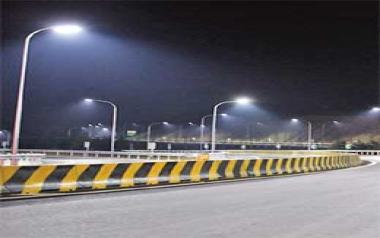